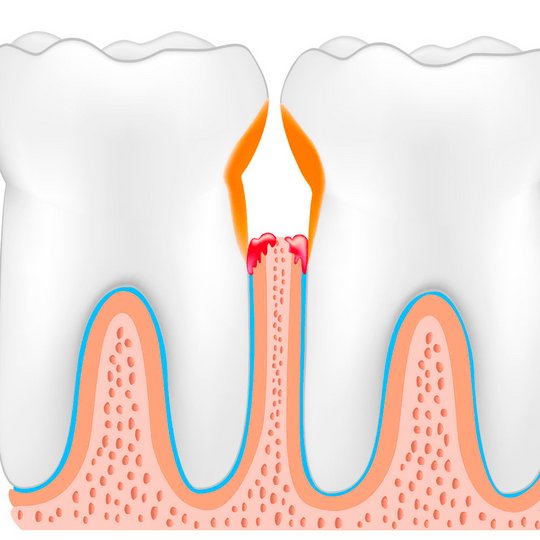 Periodontitis can manifest itself in various symptoms. If one or more of the following symptoms apply to you, you should consult your dentist.  The earlier periodontitis is treated, the better the success of treatment will be.

Signs of periodontitis may be:

With an uncomplicated aMMp8 test we can detect periodontitis before clinical findings are made. We would be happy to advise you in detail about the possibilities of our reliable periodontitis early detection in Berlin.

The bacterial colonisation of the tooth surface is no longer referred to as plaque but as biofilm. A clean tooth surface shows within a short time a precipitation of saliva components, food residues, dead and living microorganisms and their components.

The complexity and the disease-promoting properties increase as this so-called biofilm matures. Biofilms are ancient survival strategies of microorganisms. They efficiently protect the bacteria from the host's defence mechanisms as well as from drugs (antibiotics).

If the biofilm is mineralised, it forms the basis for tartar: above the gum line (gingiva), tartar is formed from the minerals of saliva, in the gum pocket, the so-called concrements are formed from the minerals of the sulcus fluid. Within these deposits the bacteria are not metabolically active. However, they should be removed as they promote the accumulation of biofilm.

A prerequisite for the healing of a gingival pocket is a tooth and root surface that is largely cleaned and smoothed by the biofilm. A decrease in inflammation is often accompanied by a reduction in gum swelling, which leads to a shortening of the pocket.
After cleaning, bleeding into the pocket occurs and a blood coagulum (clotted blood) forms. The blood coagulum is organised by the neighbouring tissue structures. The body immediately tries to restore the epithelial protective barrier. In the pocket, this means rapid epithelial depth growth. The epithelial cell that sprouts can develop into junctional epithelium or cornified squamous epithelium (especially in smokers).

The desired marginal epithelium can form if the tooth surface does not show any biofilms during healing and this is removed by regular oral hygiene measures. The result is a so-called "epithelial attachment" (fixation/attachment). In the unfavourable case of a cornified squamous epithelium, the pocket remains in place beyond the dental treatment (smoker).

The connective tissue regeneration including the regeneration of boils and the corresponding fibres of the periodontium and especially the inhibition of the epithelial deep growth is controlled by the root cement.

The protection of root cement during treatment is of great importance. It is therefore not necessary to remove the root cement or existing granulation tissue (inflammatory tissue) by systematic curettage or extensive surgical procedures in order to heal the treated pocket! This would have an unfavourable effect on tissue healing. The soft tissue trauma associated with the treatment should be avoided as far as possible in order to keep uncontrolled gum recession and its consequences such as hypersensitivity or later root caries as low as possible.

Systematic curettage with sharp curettes with forced substance removal on the tooth surface, as well as soft tissue curettage to remove granulation tissue, should be avoided today.

Instead, modern minimally invasive periodontitis treatment is carried out using mechanical sonic or ultrasonic instruments to remove tartar and concrements and gentle powder jet devices to remove the greasy biofilm and smooth the surface.

Inflammatory periodontitis cannot be treated by building up bone. On the contrary, as long as the inflammation exists, the bone structure will not grow.

However, if the inflammation is successfully treated, the body often regenerates and repairs itself to an amazing extent.

Some cookies we place on your browser ensure that the DentalFirst website delivers you information and services securely and optimally. You must accept these essential cookies to be able to make use of our online systems.